Glamour and Goop: An Interview with Susan Egan – 030

Susan Egan is a Tony Award nominee for Best Actress as Broadway’s original “Belle” in Disney’s Beauty and the Beast.

She has over 400 solo concert credits with symphonies worldwide, including concerts at Carnegie Hall, Lincoln Center and the Hollywood Bowl, and she has more than 40 recordings credits with seven solo CDs.

Join me and Susan as we talk about juggling career and motherhood, how parenting requires us to check our egos at the door, and the importance of taking care of ourselves so we can show up more fully for our kids. 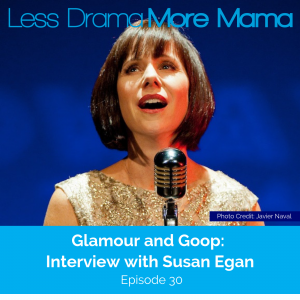 FEATURED IN THIS EPISODE:

I’ve been up since 4 a.m.
‘Cause she had runny nose
Changed her diapers -twice
Washed her dirty clothes.
She threw down her sippy cup
And then smeared me with some jam.
I looked at her and said,
“Don’t you know who I am?”

Nina doesn’t care
If I was once a star
She just pulls my hair
As I strap her in the car.
She’s never seen me soar
Charm them with a song
Once an ingenue
To her I’m only mom.
When I’m on stage it’s like I walk on air
Nina doesn’t care.

The Times said I was stunning
I got four stars from the Post.
Nina only giggles,
Whacks me with her toast.
As she puts me through the paces
I try not to yell,
But it’s hard when she prefers
The mermaid over Belle.

Nina doesn’t care
If I’ve had a lousy night
Tired voice, worn out
Every song a fight
Or if I lost the part
A role I’d wished I’d won
Or got a bad review
What more could I have done?
Then holding her’s the answer to my prayer
Thank God,
Nina doesn’t care.